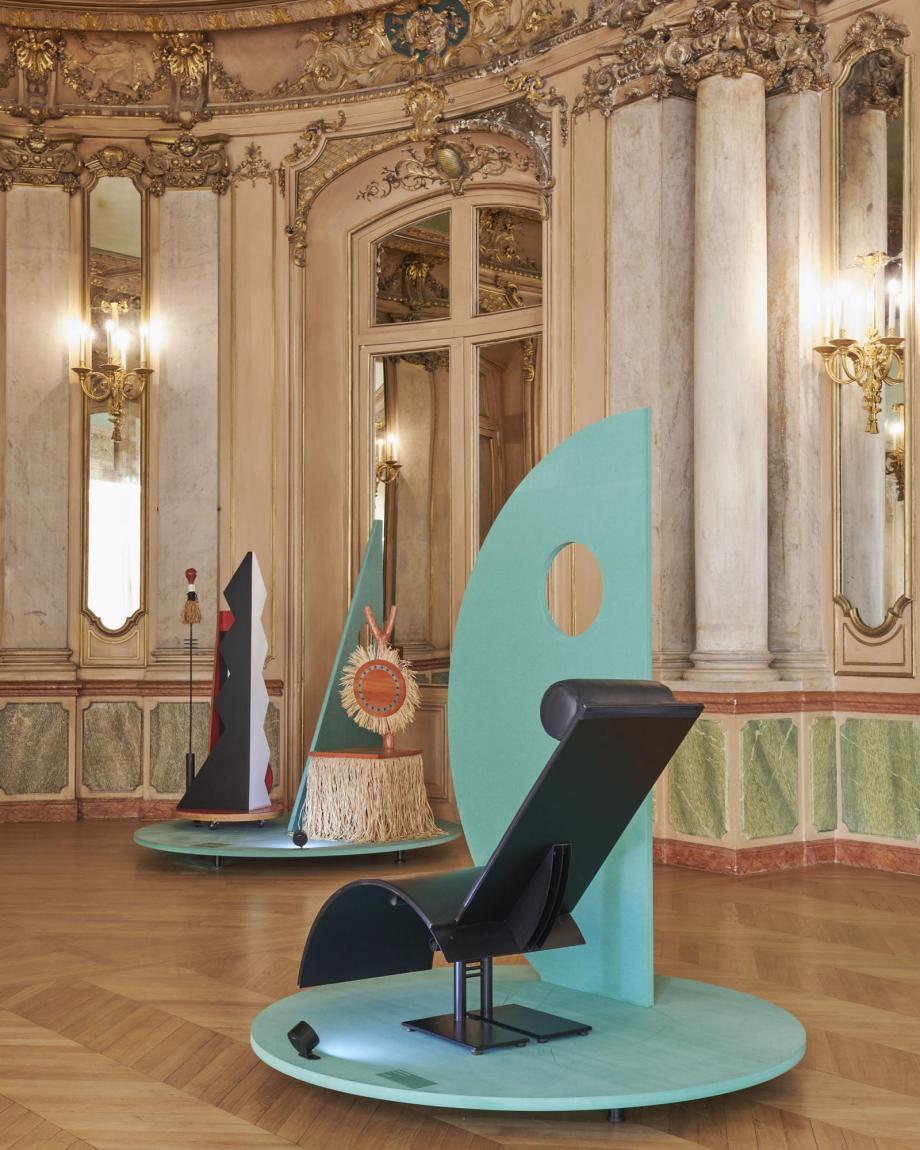 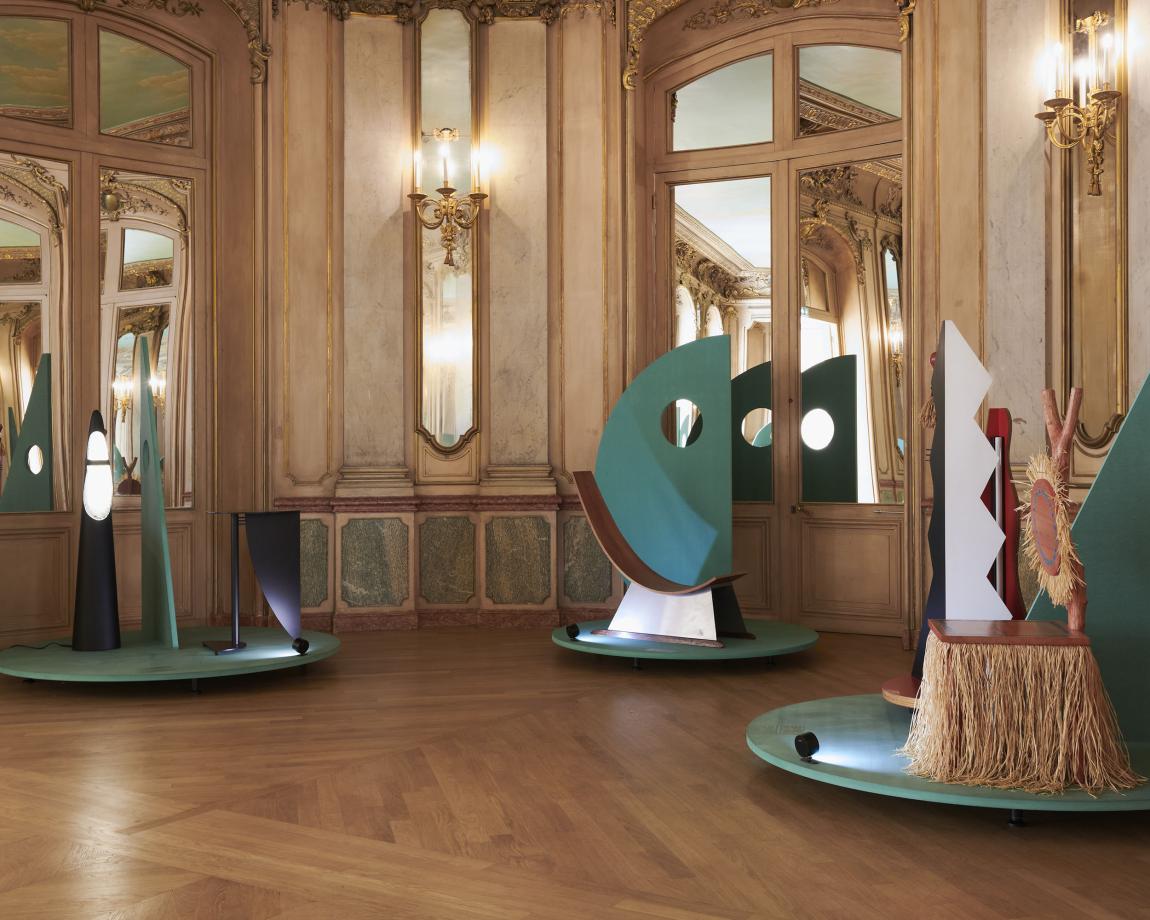 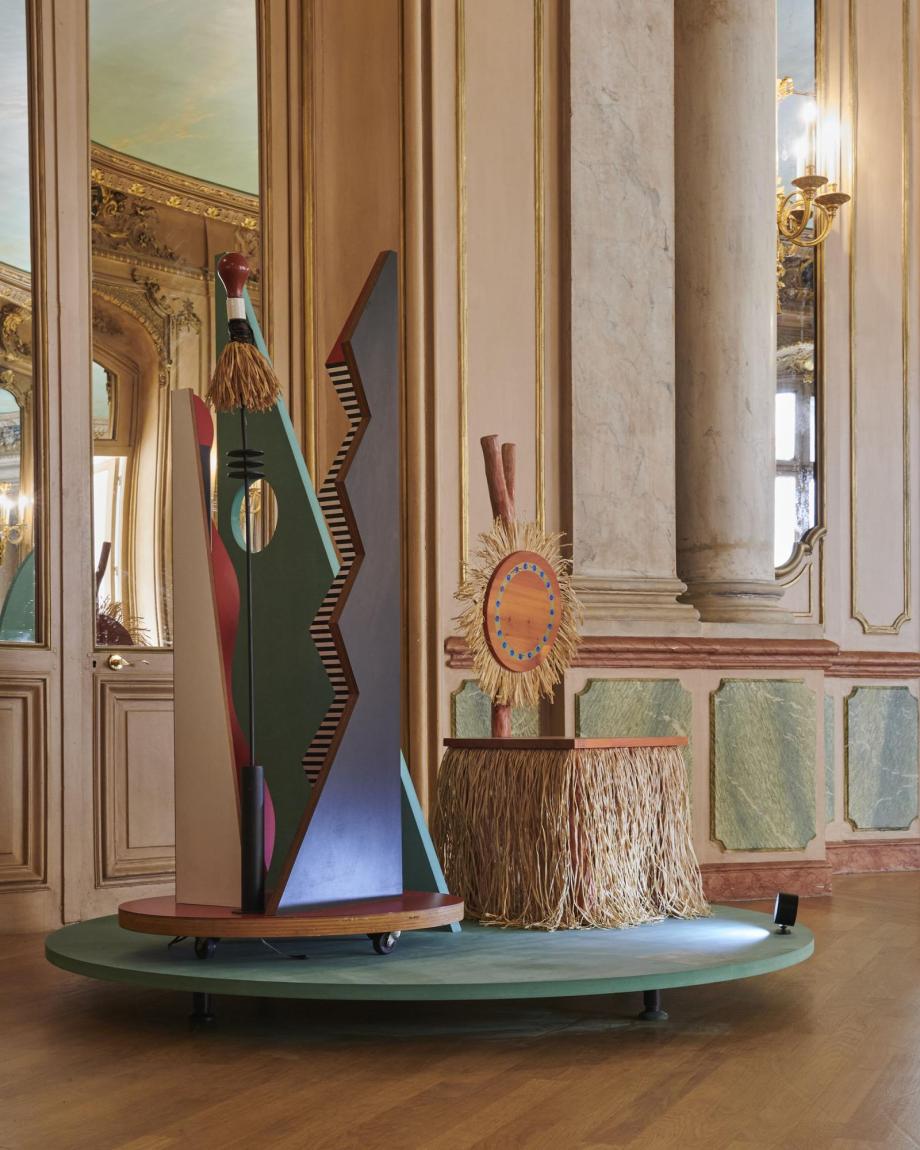 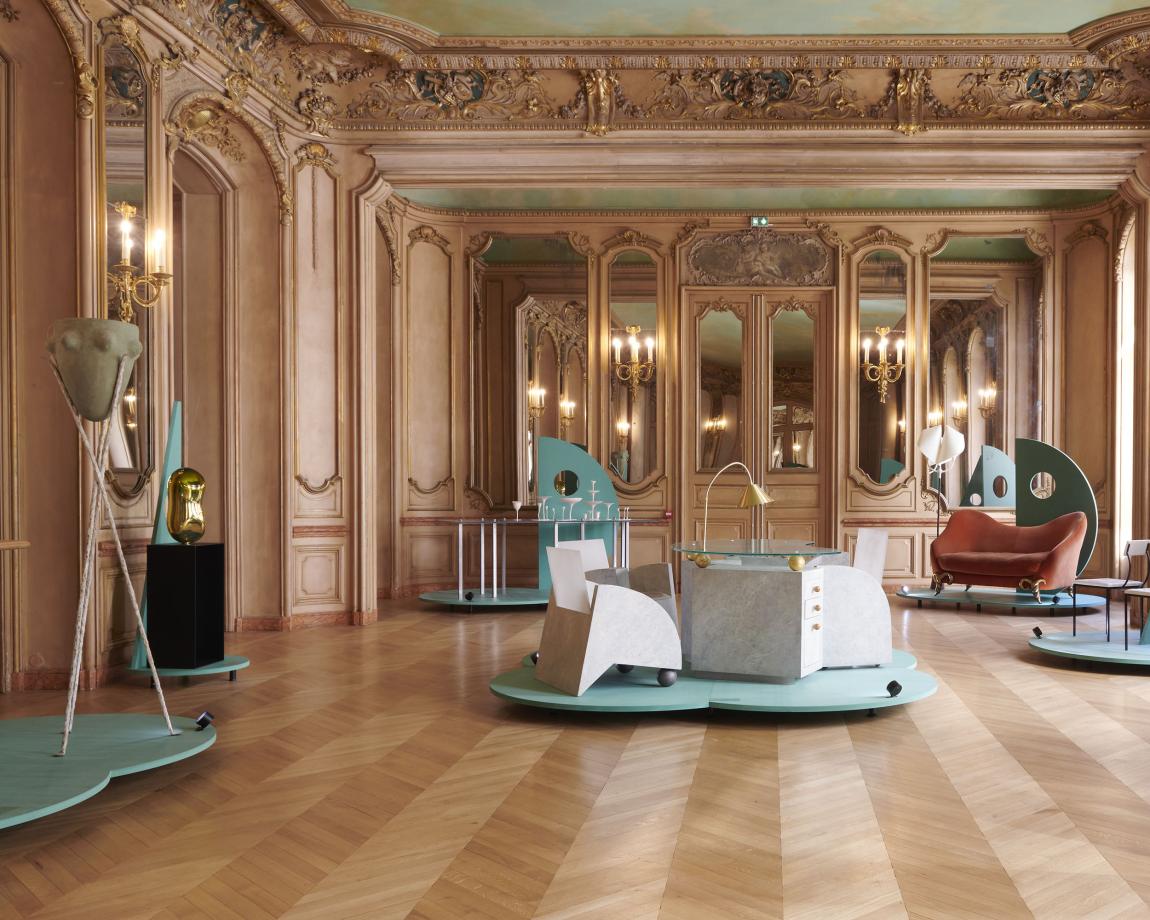 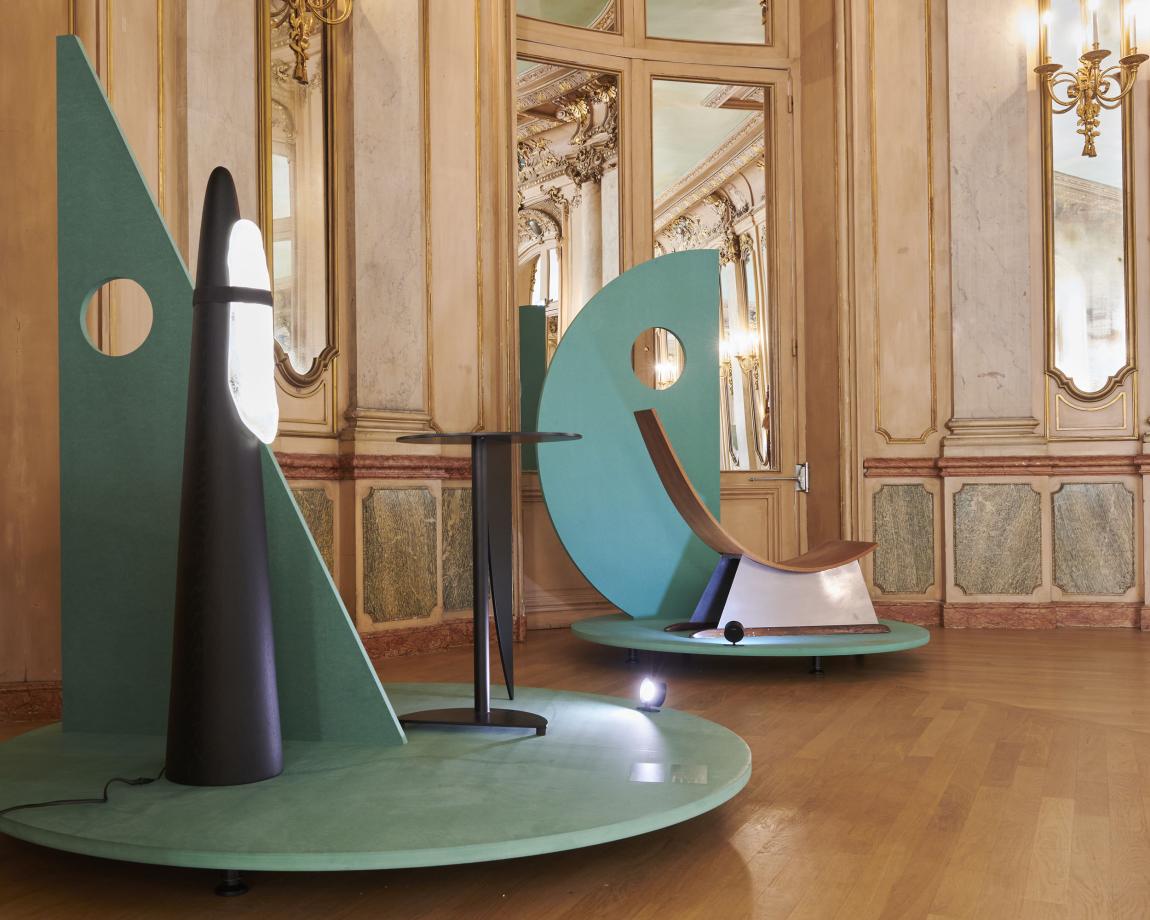 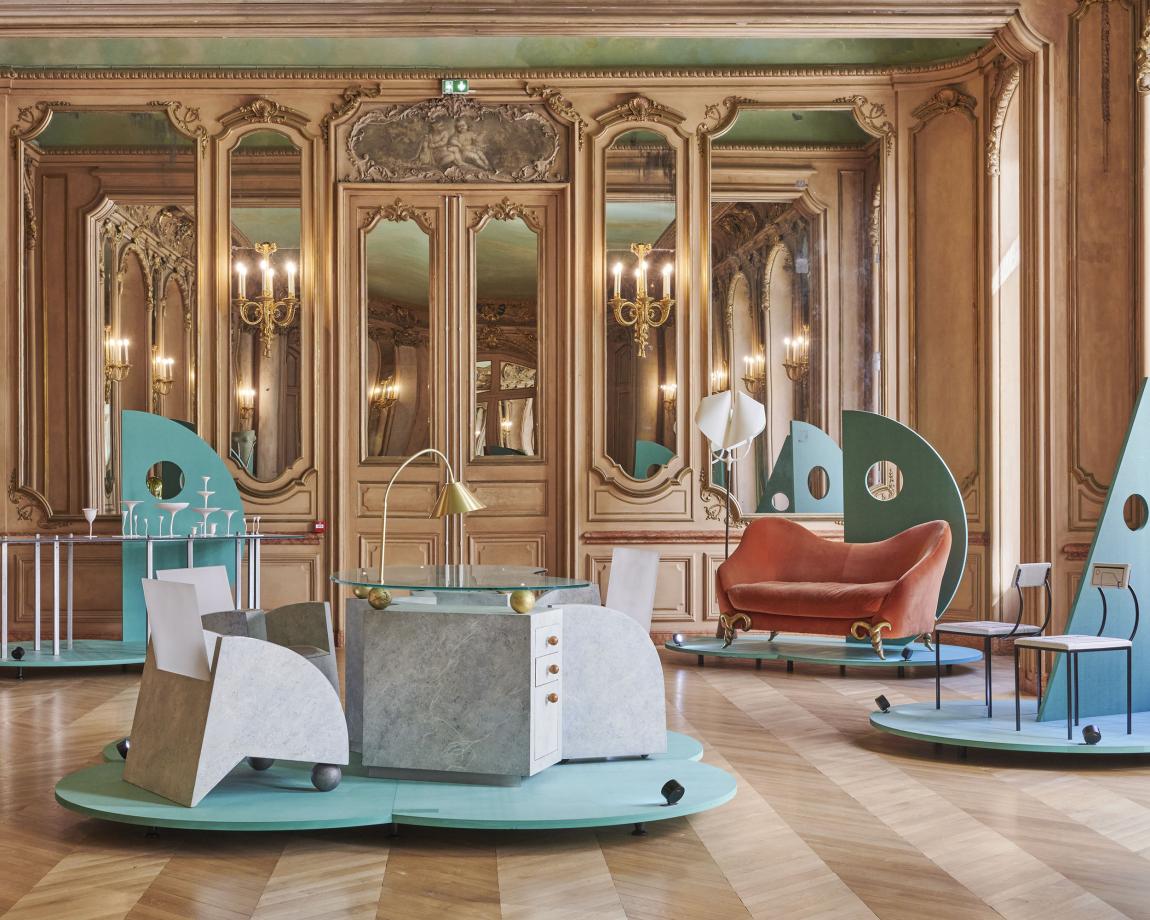 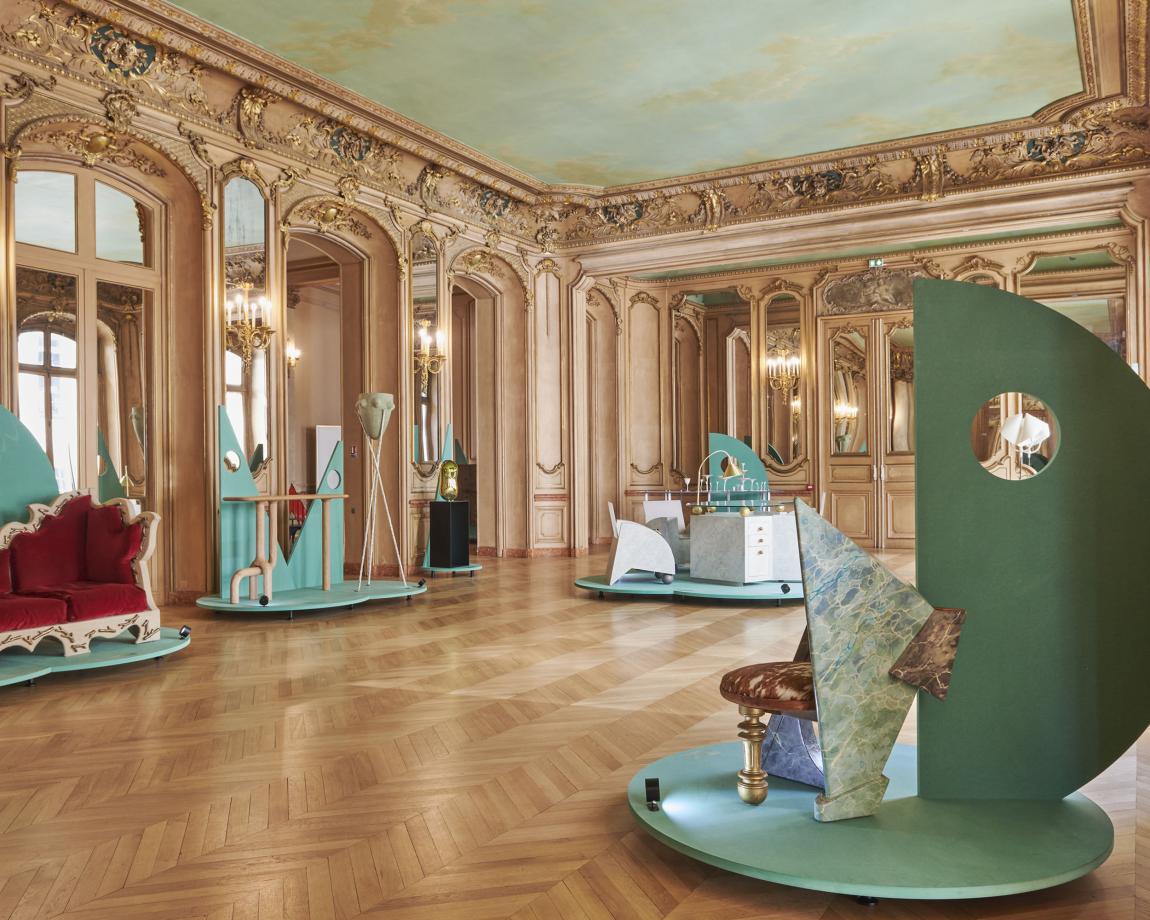 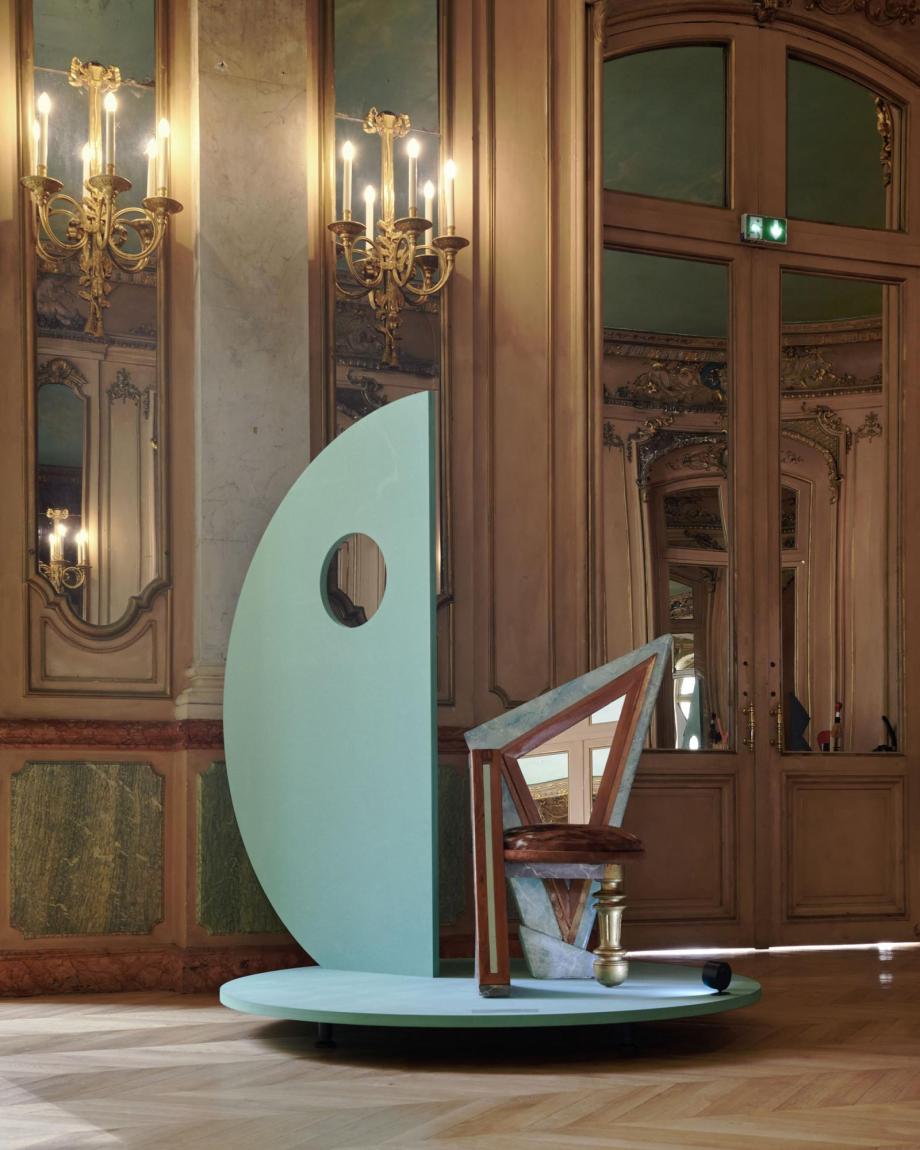 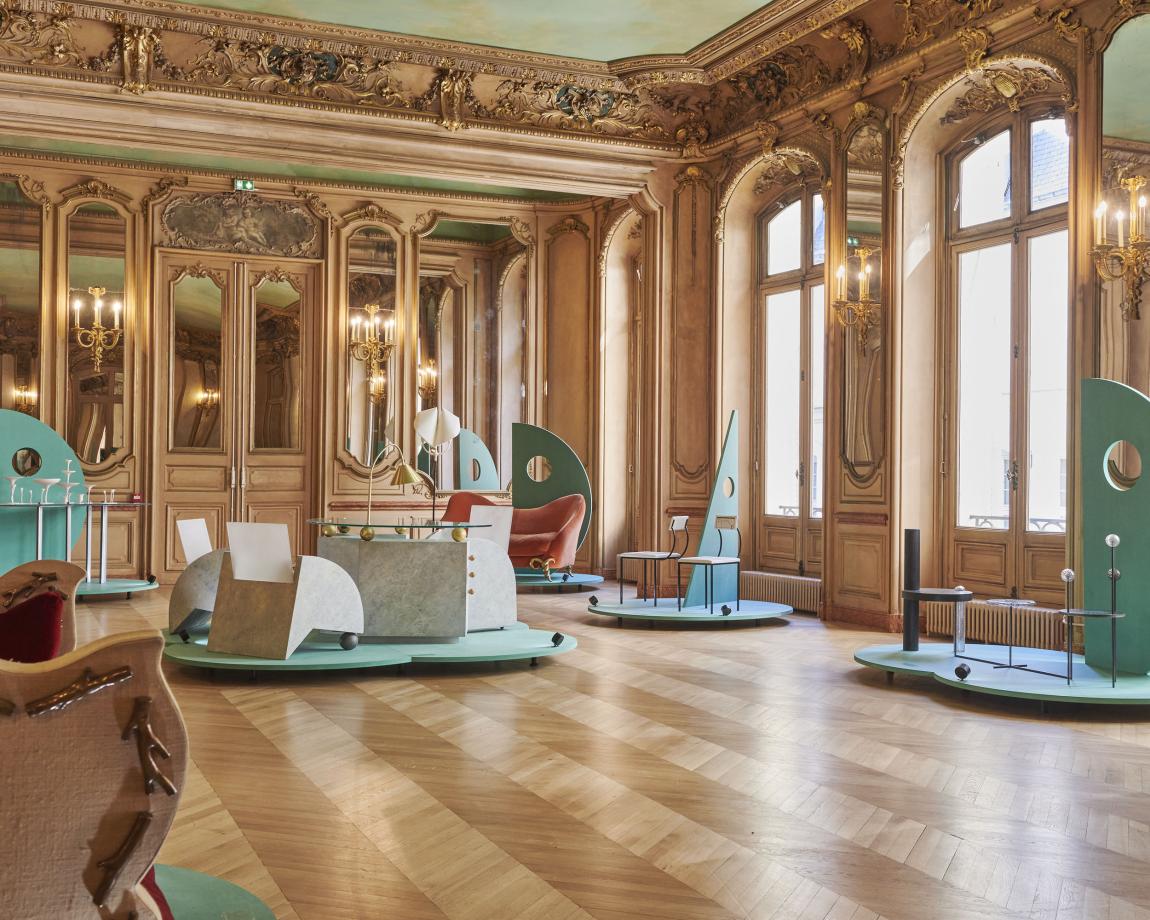 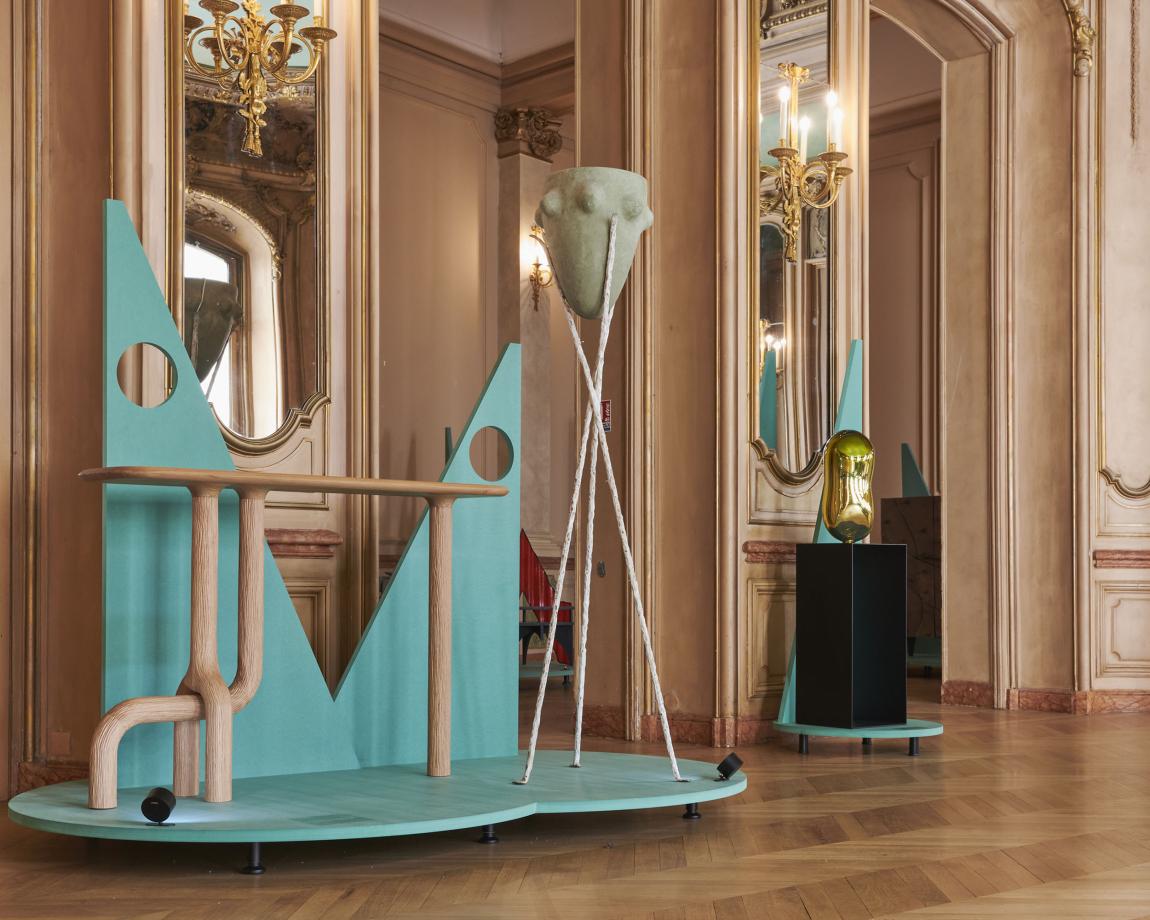 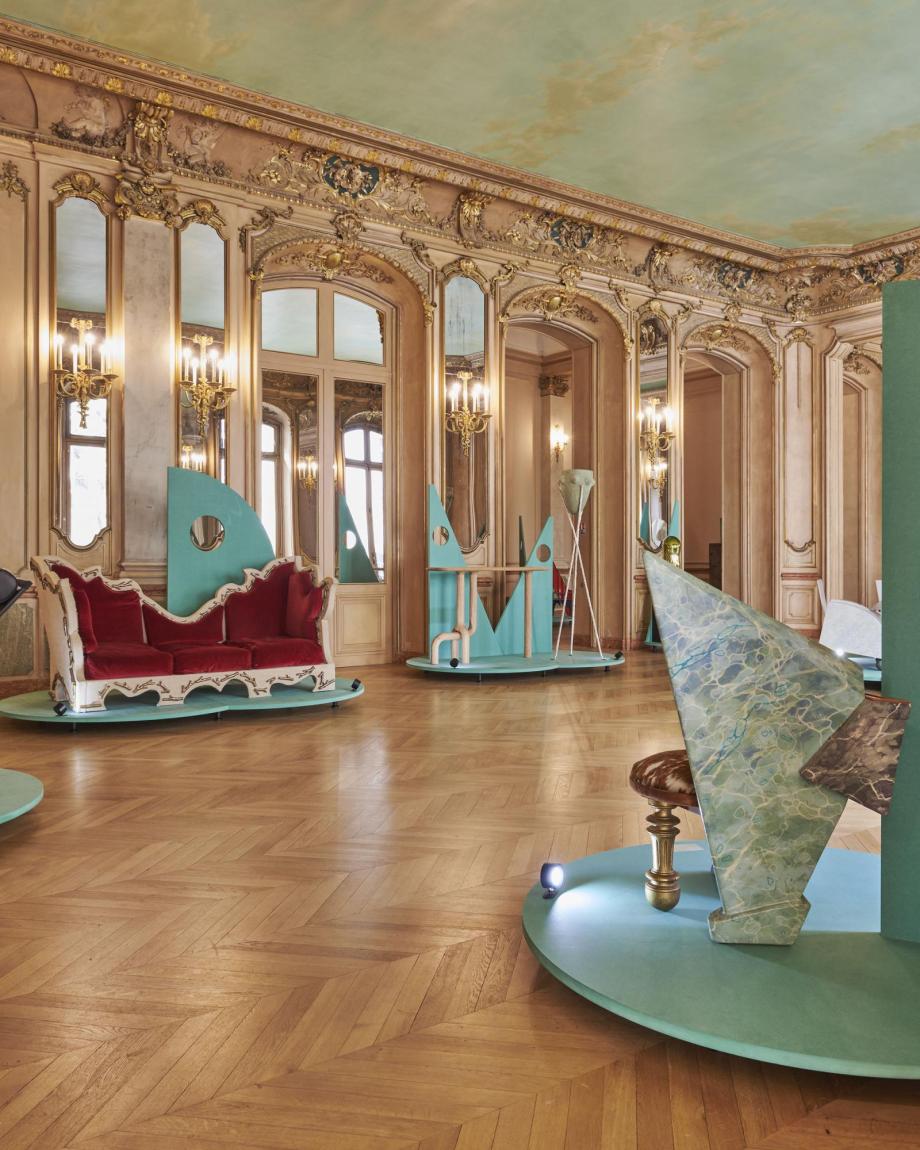 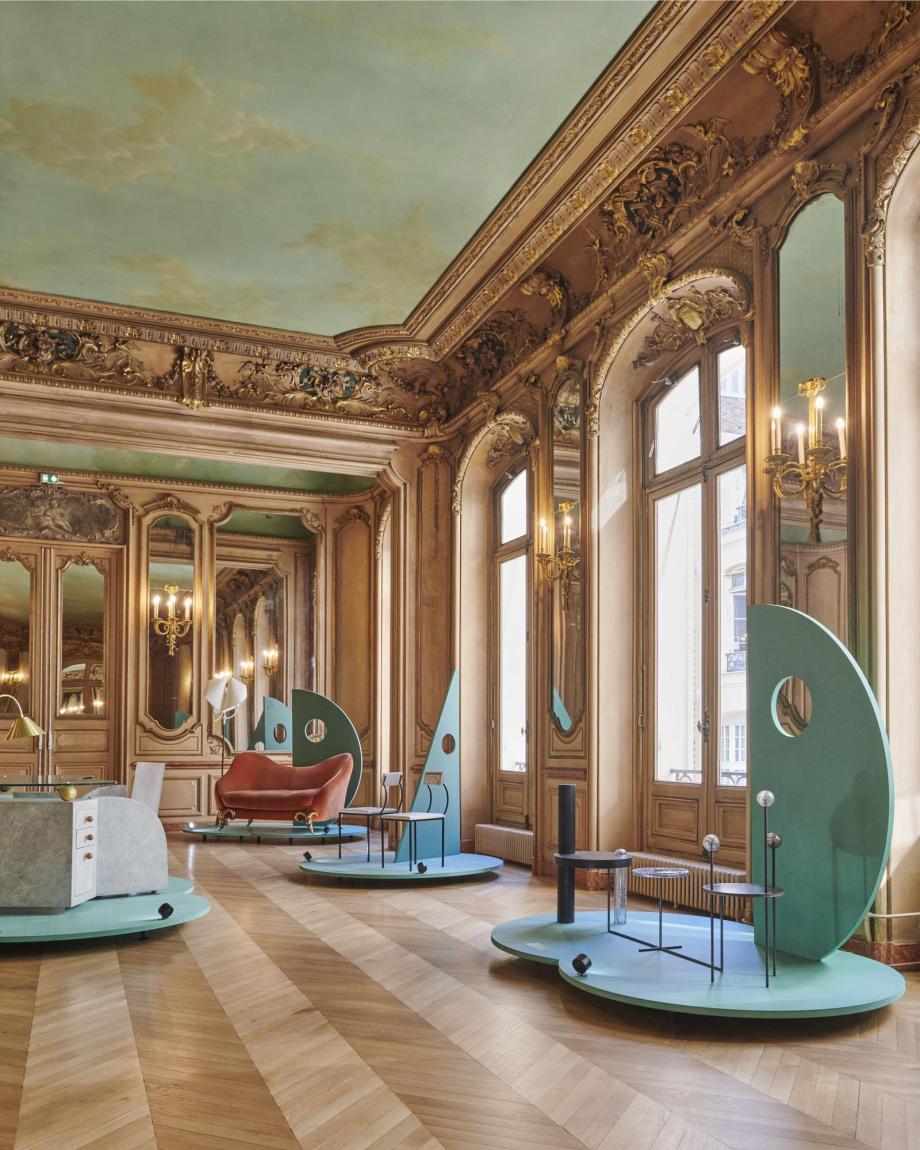 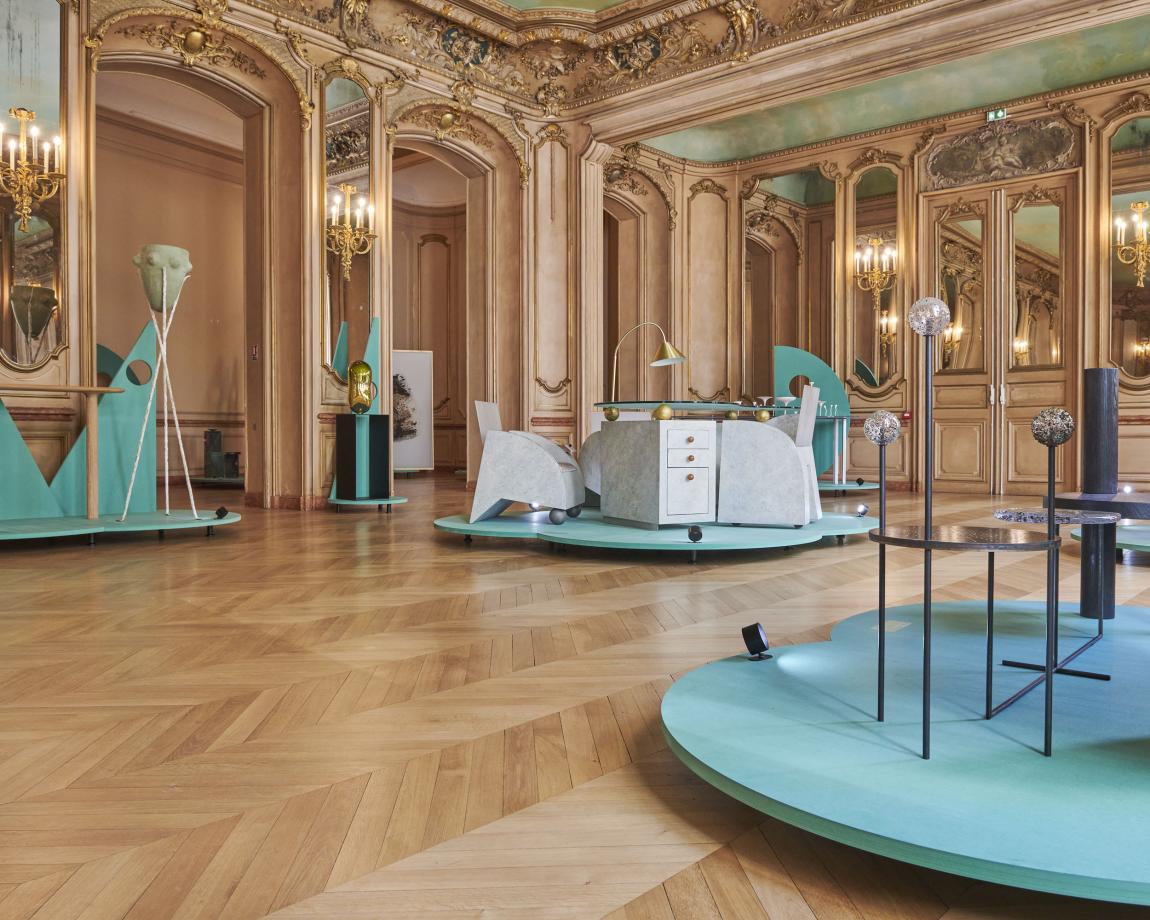 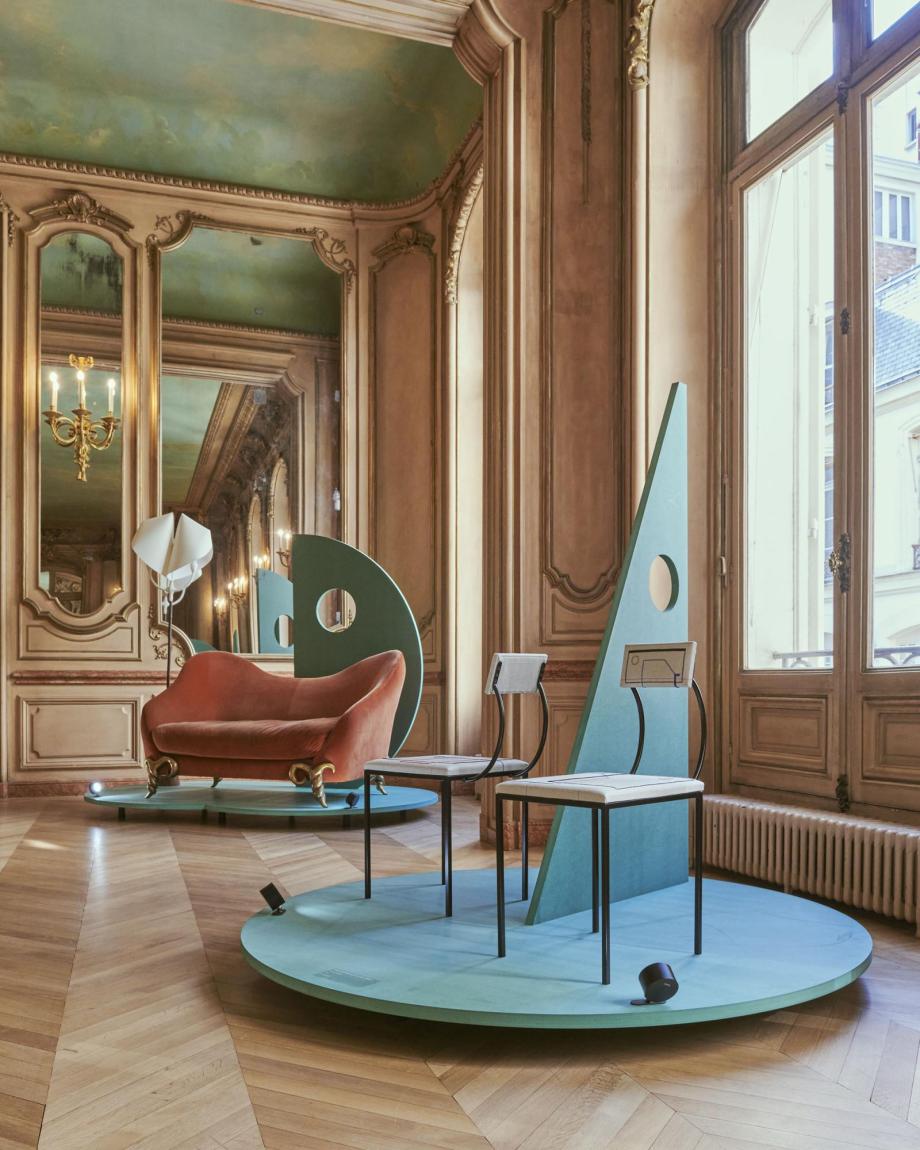 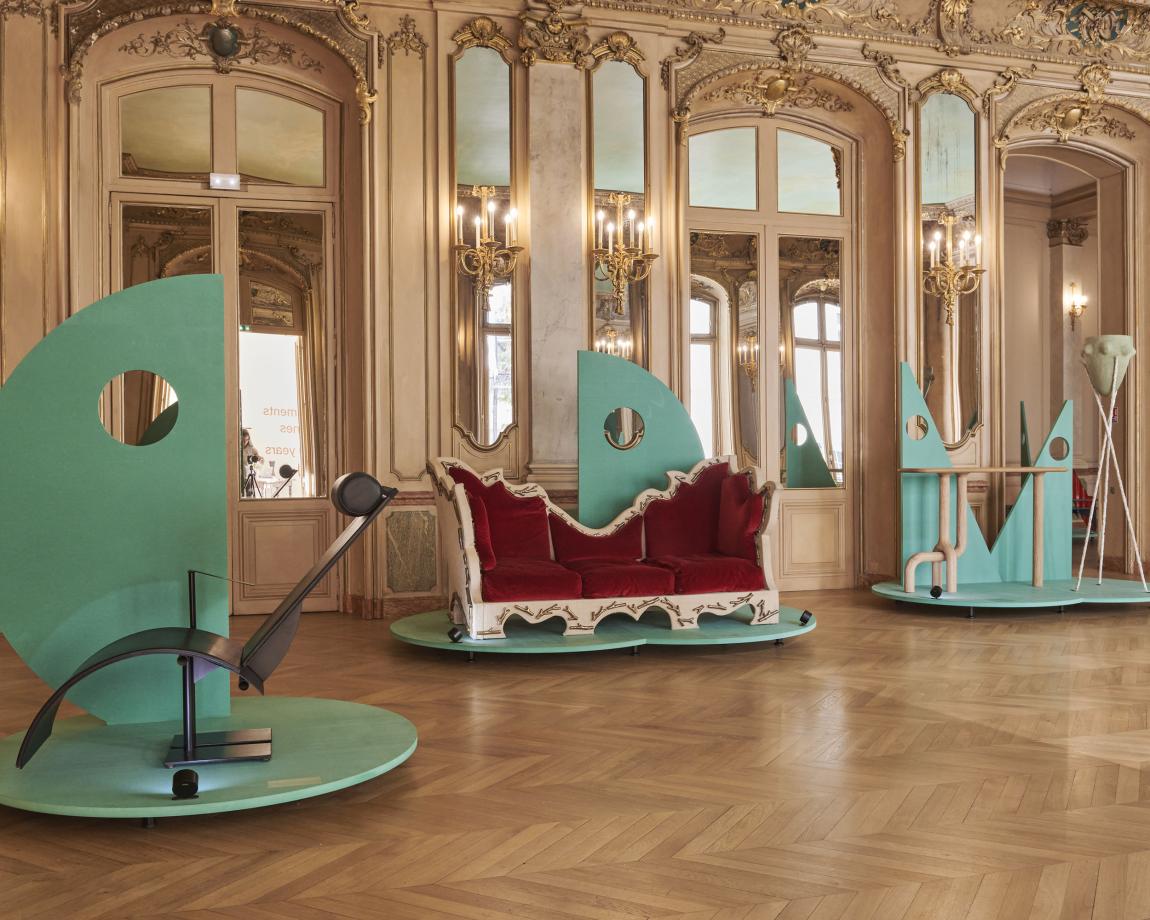 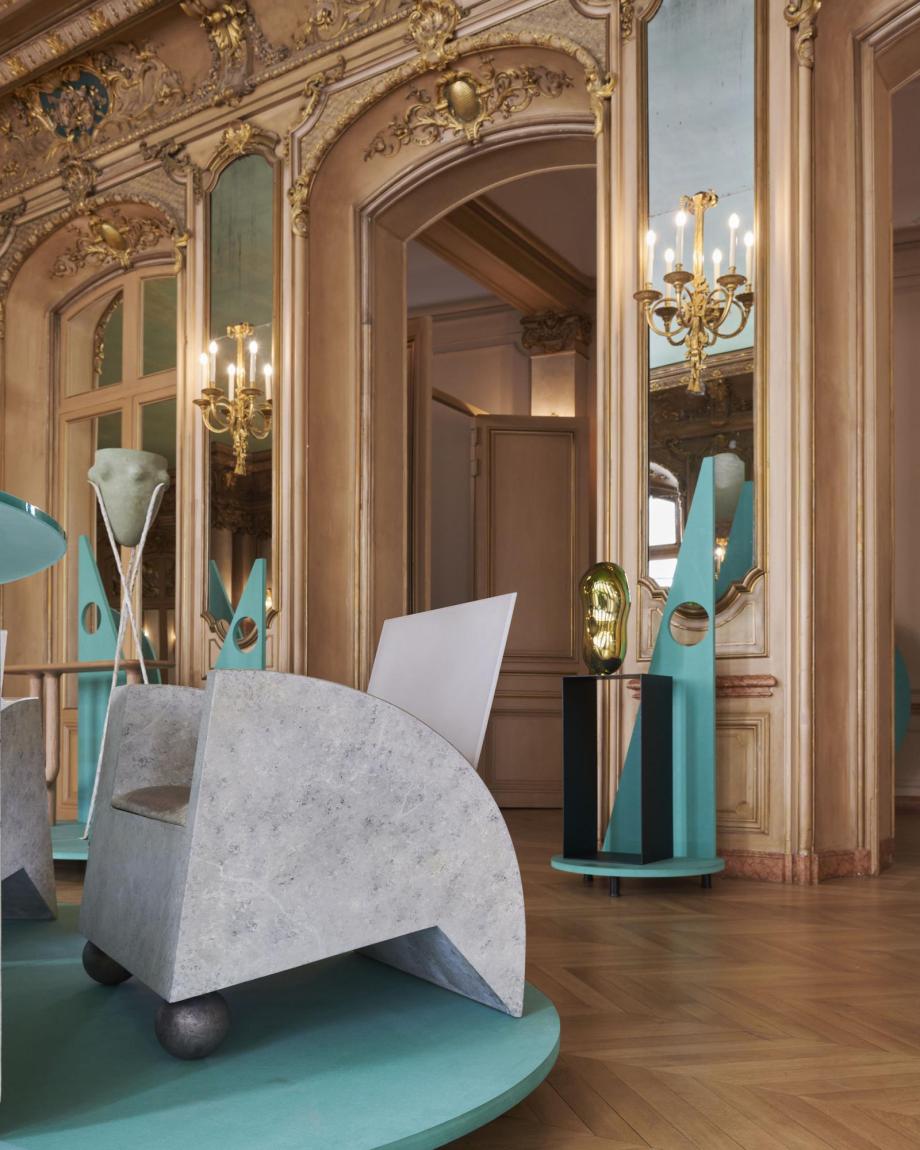 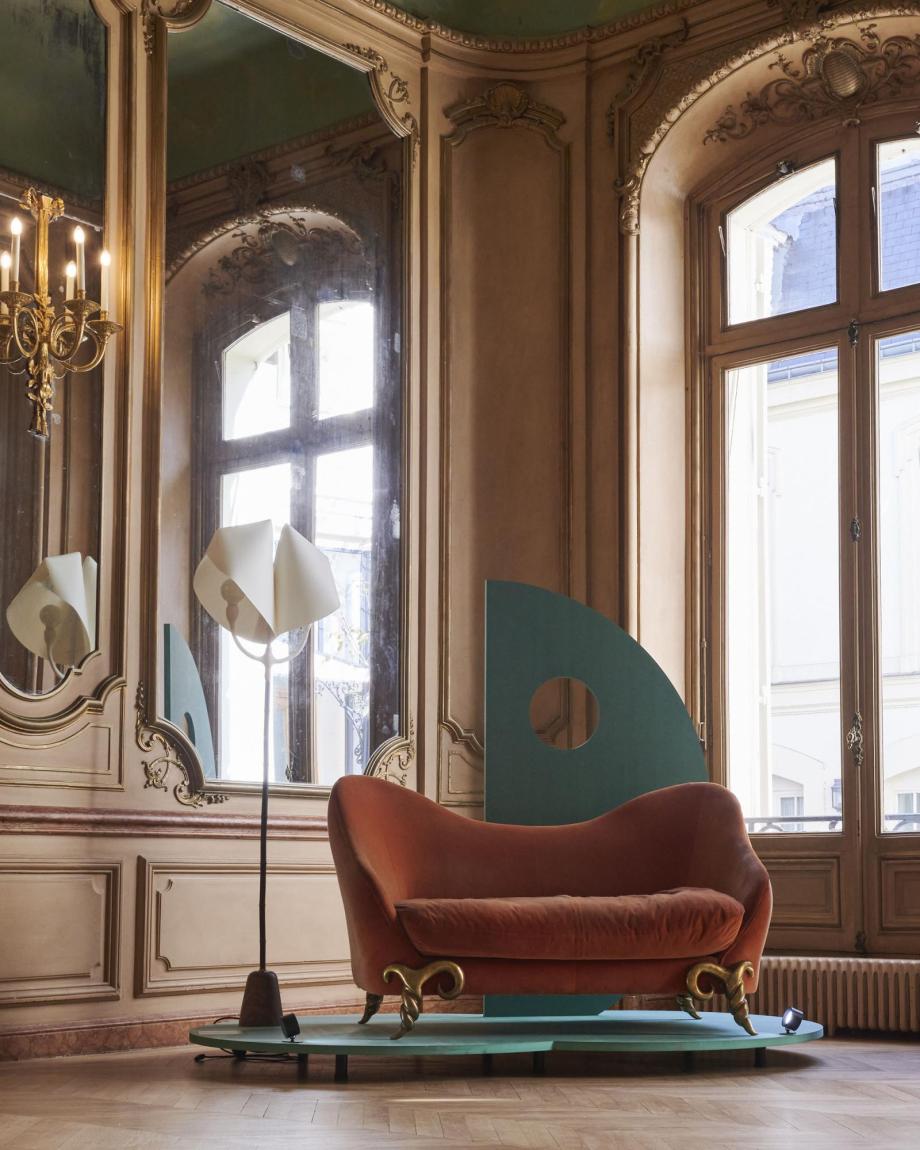 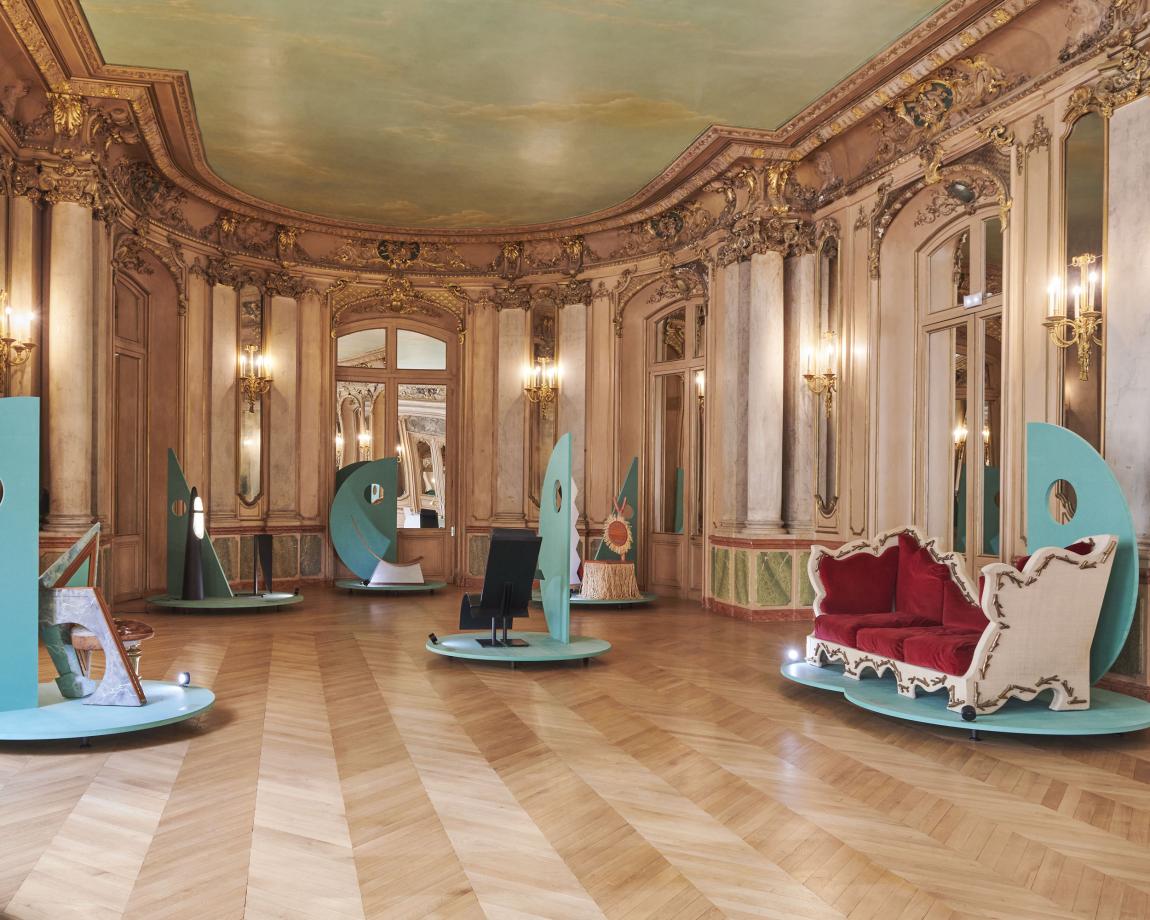 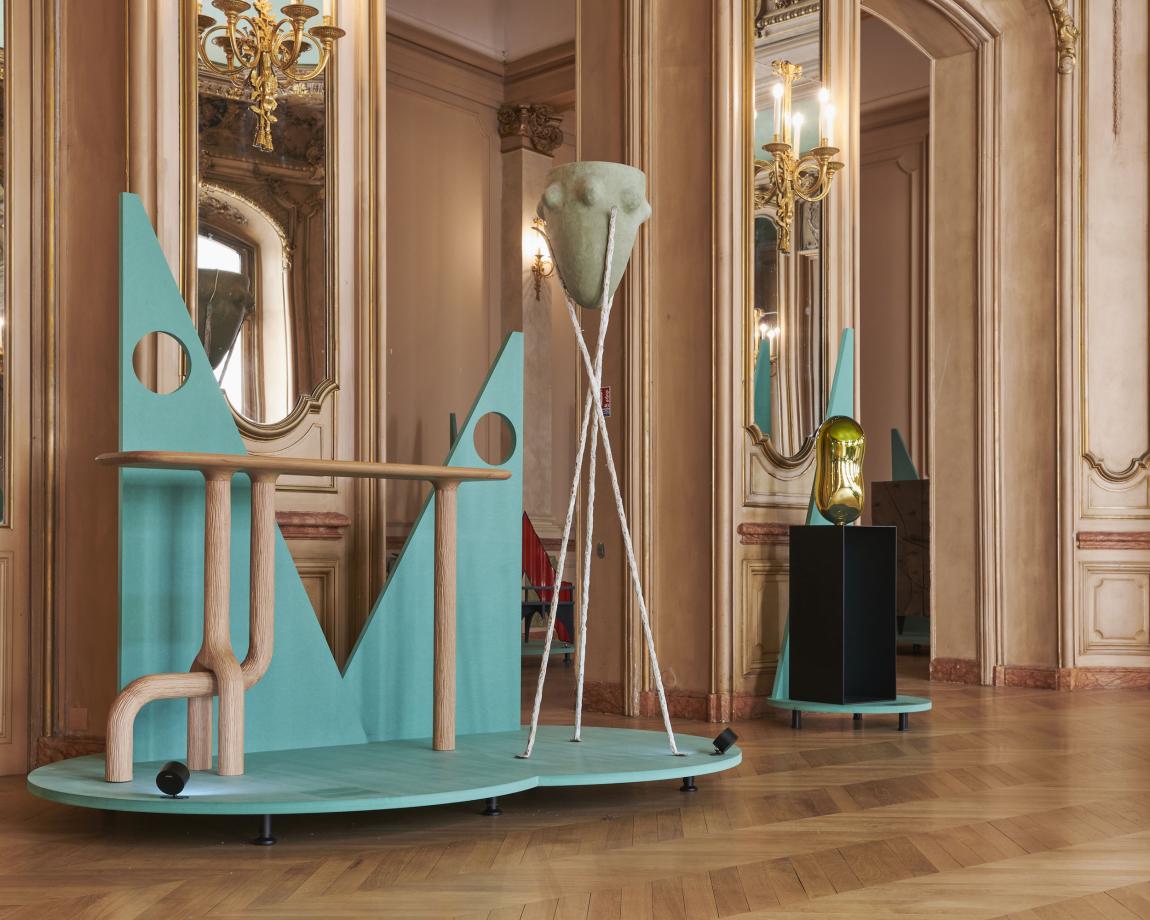 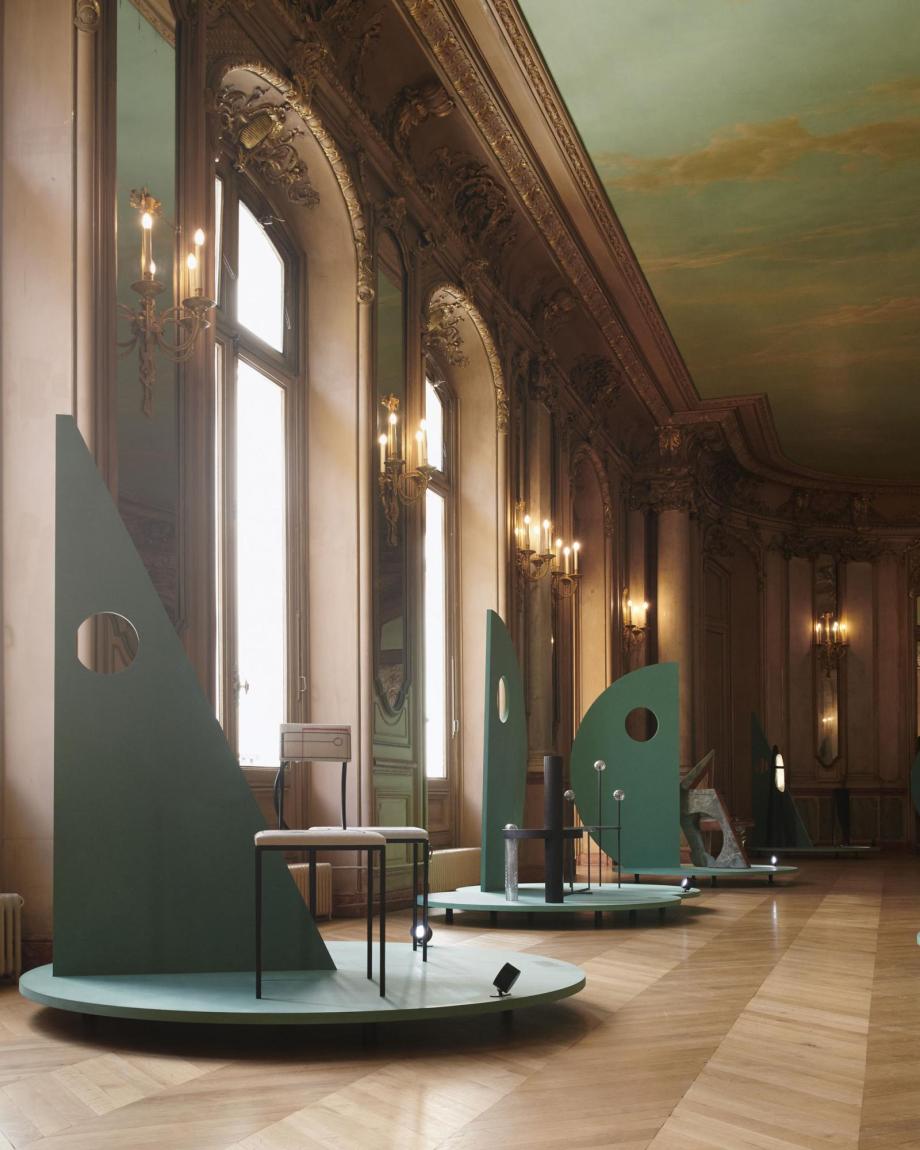 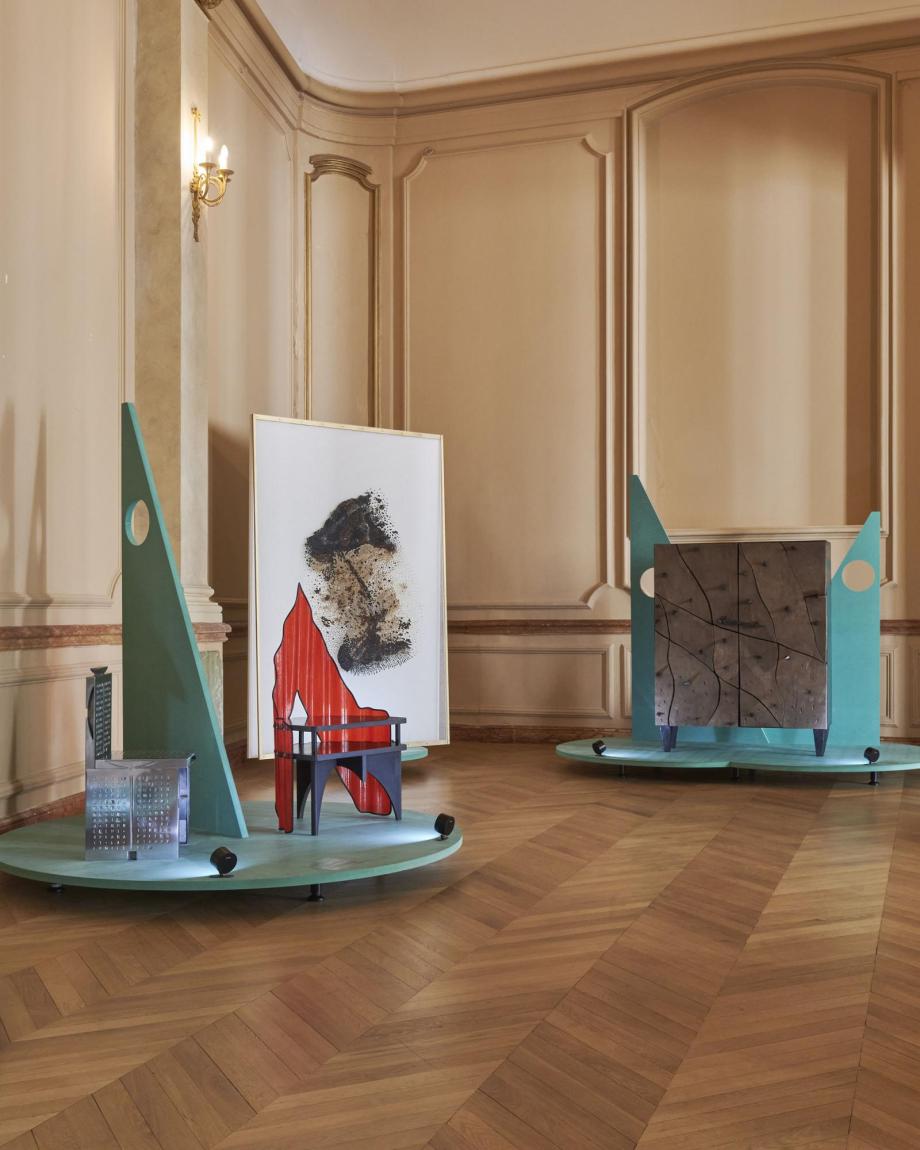 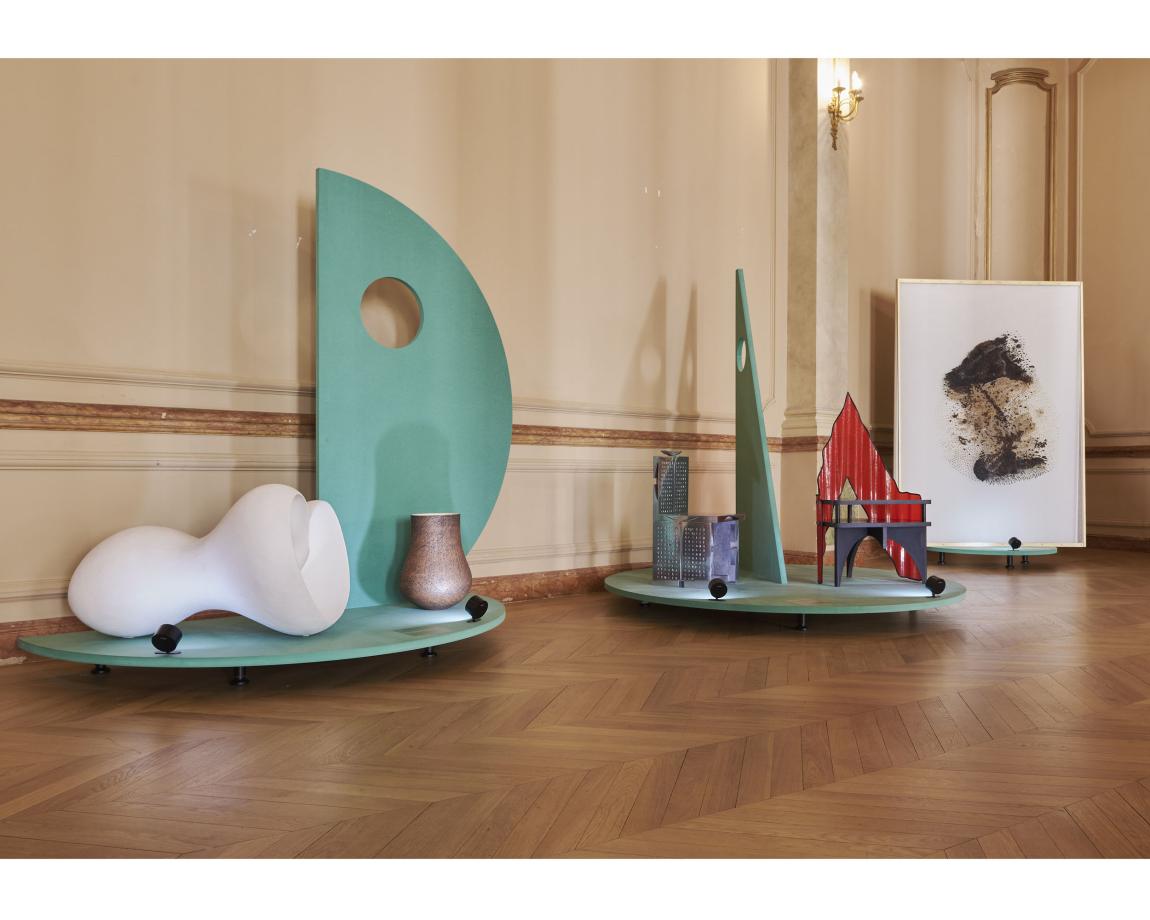 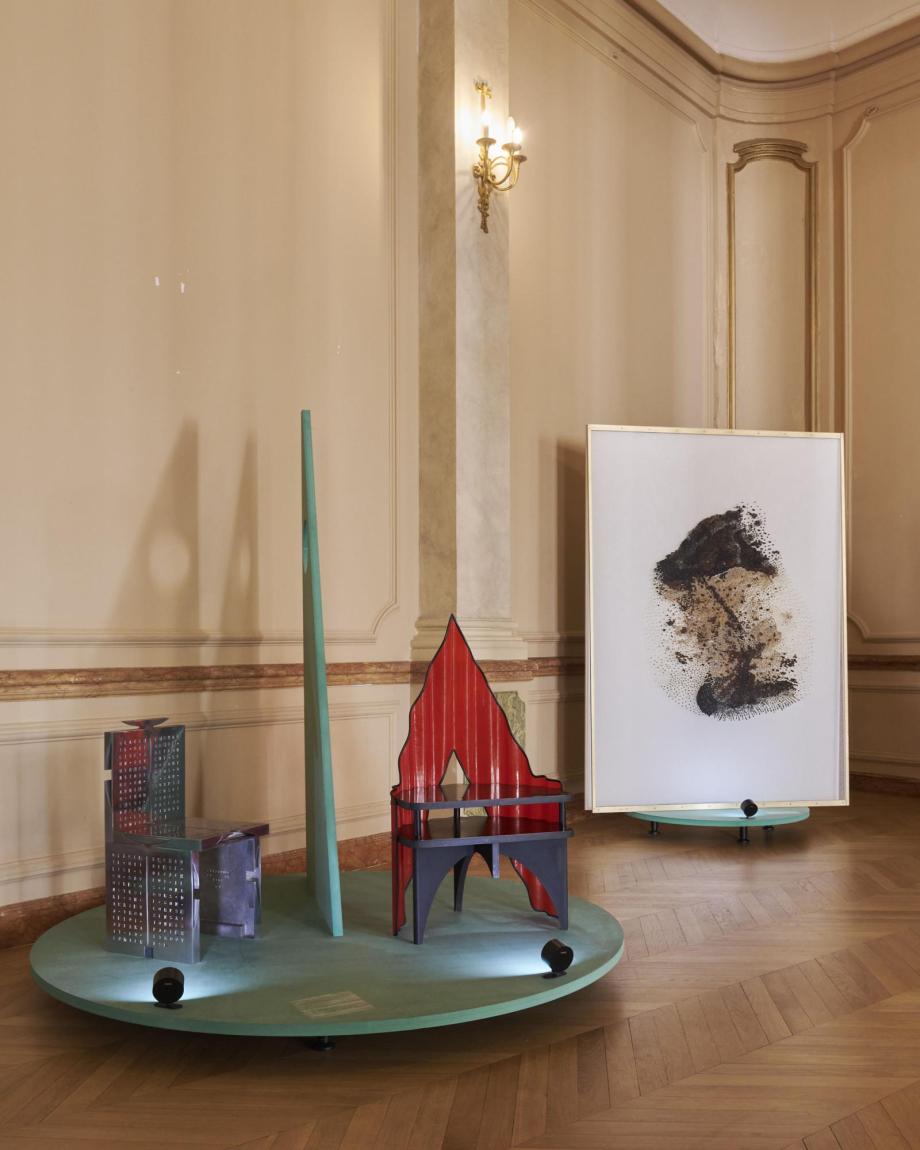 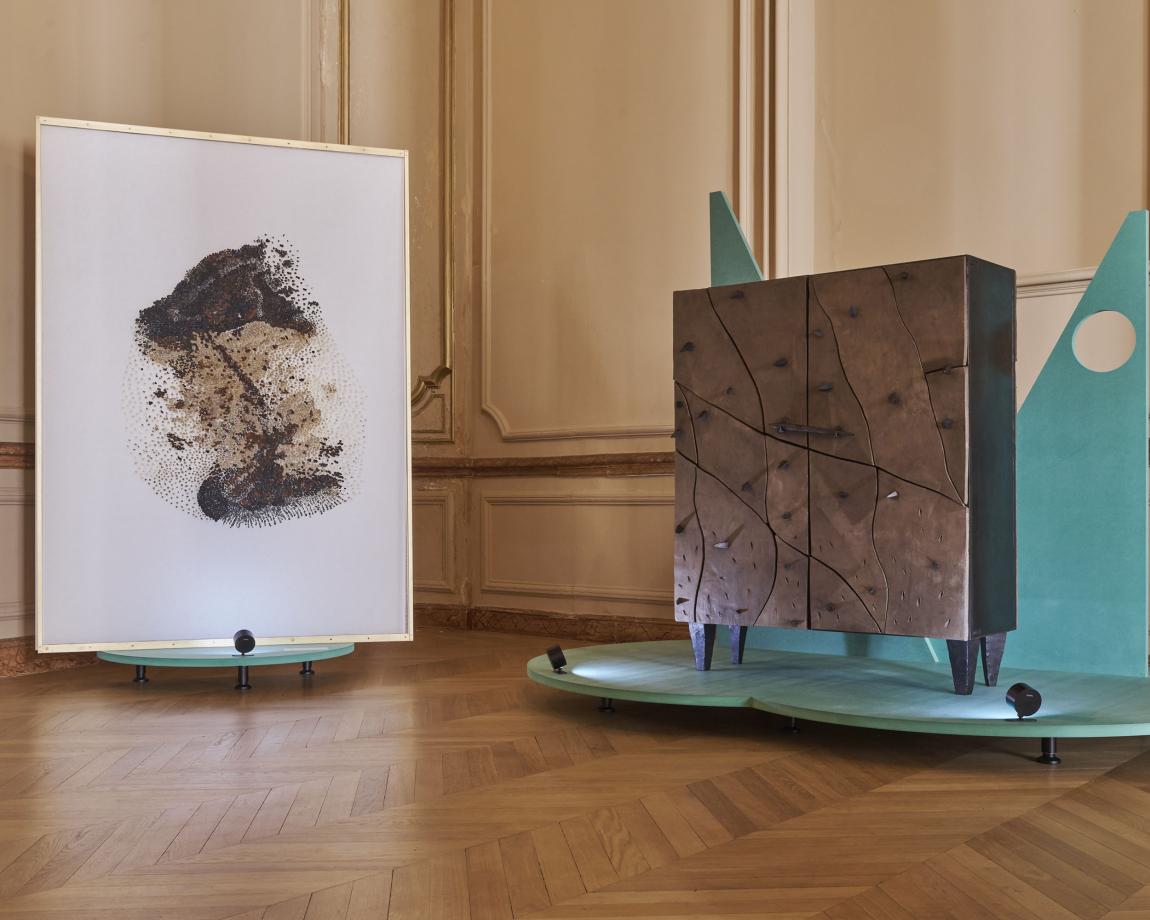 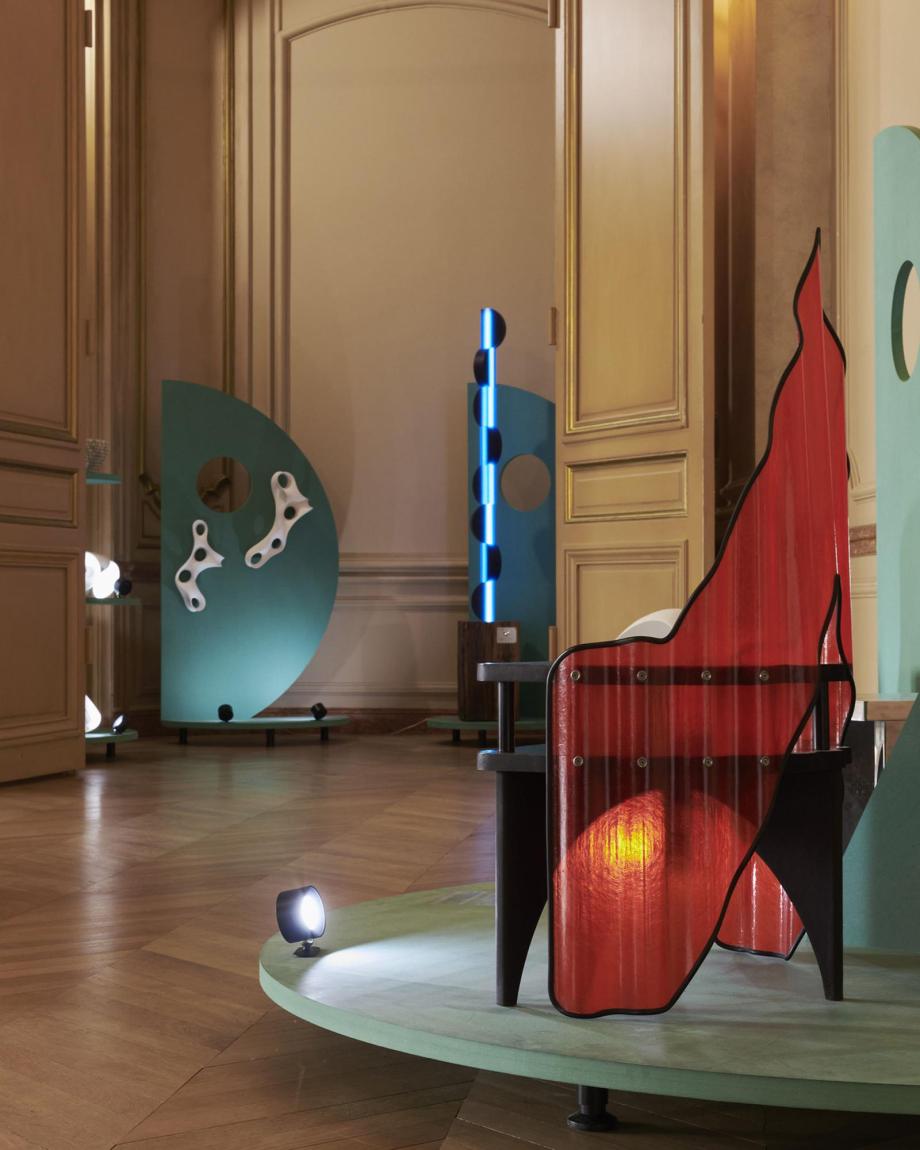 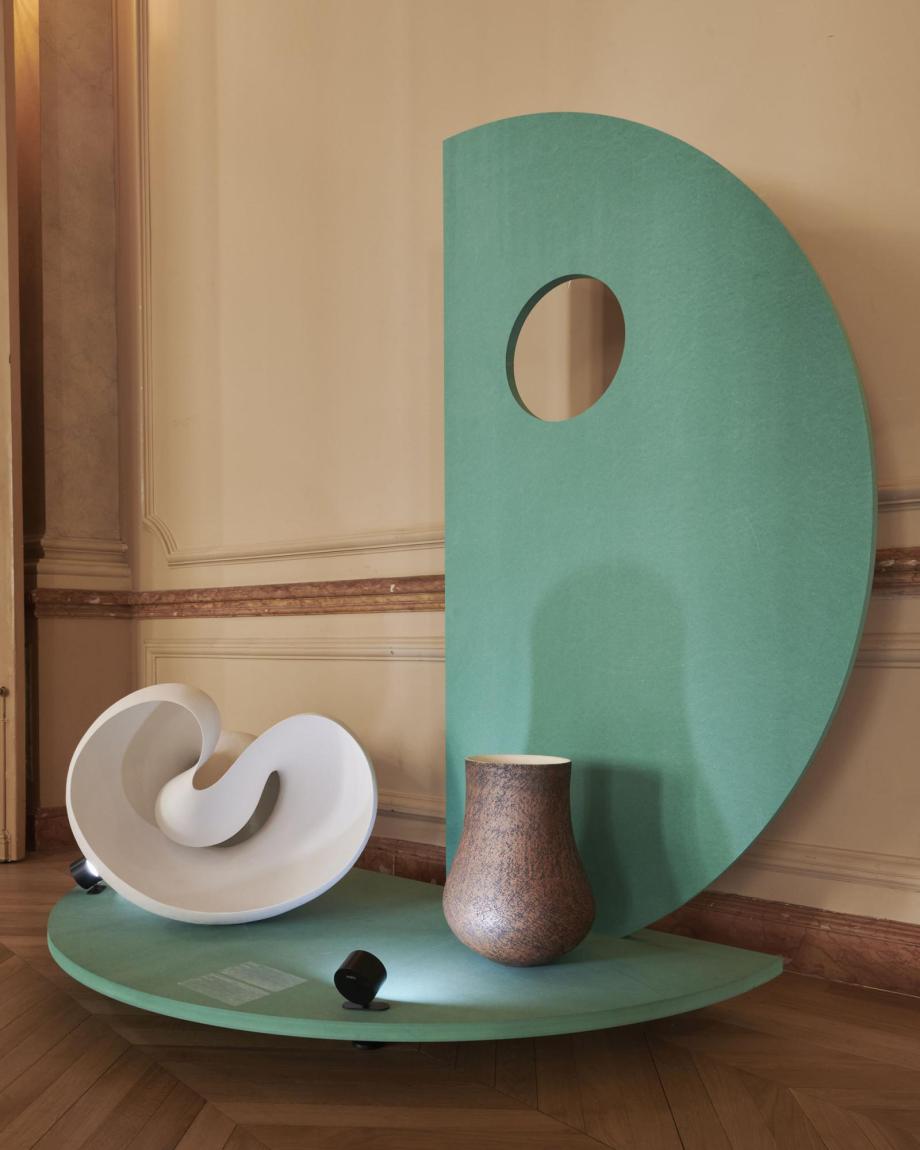 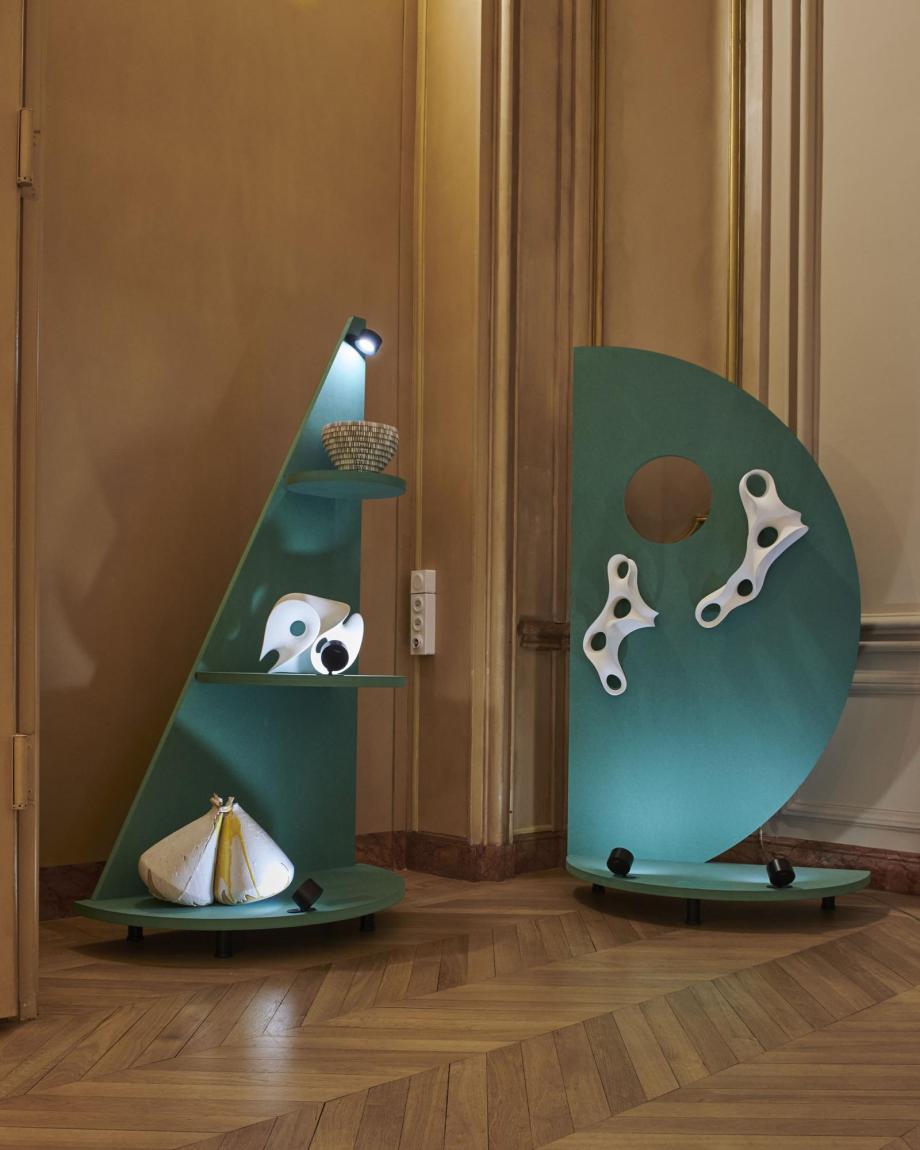 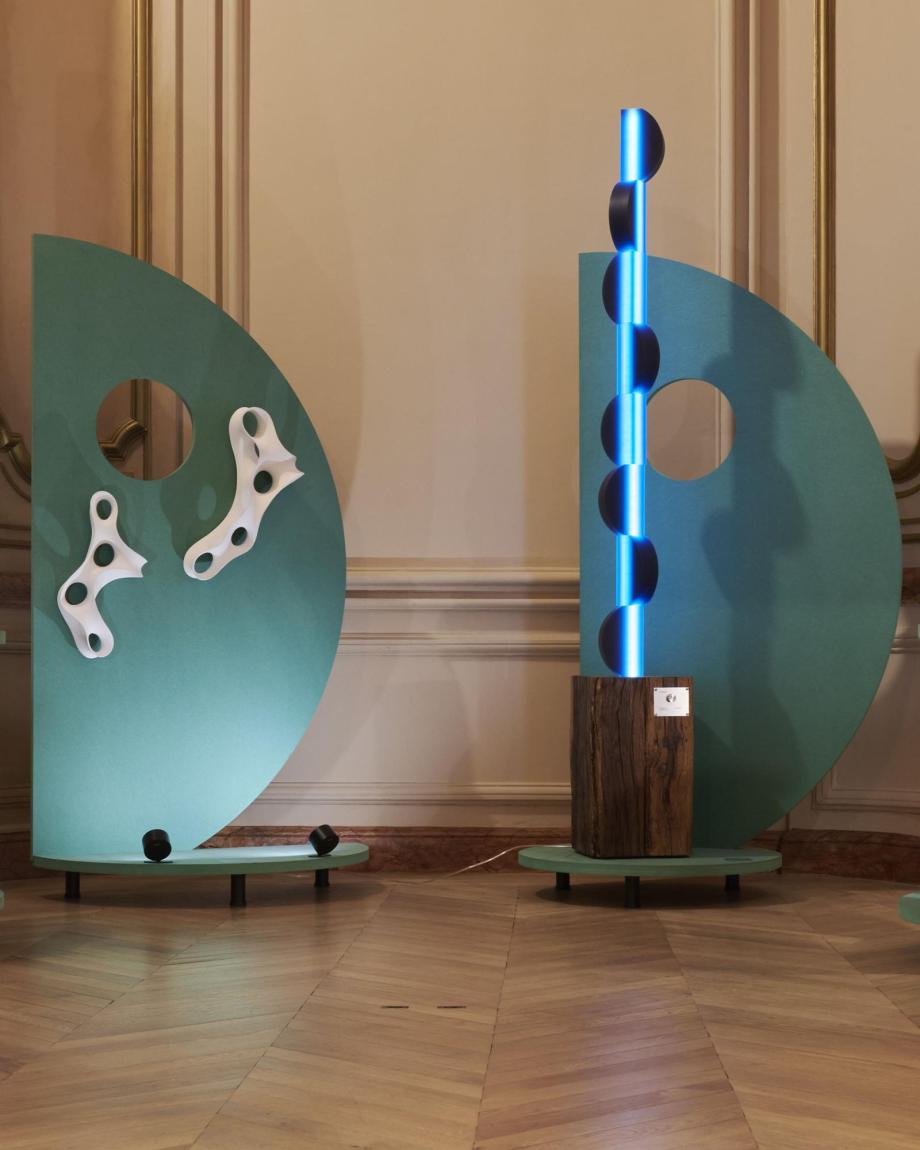 Works About the exhibition News

and when you love

At 20, you are not reasonable

and you take risks.

At 20, passion inhabits body and mind,

and the future is calling you.

Back to the future.

Putting a singular movement into the plural: this was one of those things - as he described the objects of thought - that excited Pierre Staudenmeyer's adventurous and unusual spirit. Was it because the Modern Movement, born at the beginning of the 20th century, intended to wipe out the architectural and formal principles that had preceded it, that this discoverer named his new gallery "Mouvements Modernes"? No doubt, and probably even more so: for Staudenmeyer, who died in 2007, design was an "art form condemned to serve the everyday", as he put it.

A surveyor and precursor, Staudenmeyer was as much a gallery owner as a dealer, as much a form historian as a marketing man (his training), as much a psychoanalyst as an exhibition curator, as much a collector as a dealer. In the mid-1980s, the metallic and industrial years if ever there was one, he created the Néotù (Neo tout) gallery with his accomplice Gérard Dalmon, inventing "collection design" in the process. Going against the grain of his time, which saw "handmade" as a backward step tinged with conservatism, he sought out craftsmen, custodians of exceptional know-how, to create pieces that today are indisputably part of the French heritage of decorative arts.

part of the French heritage of decorative arts.

The exhibitions at Néotù are always an opportunity to make the visitor think through clashes of styles and periods, to propose intelligent and daring combinations: "short-circuiting forms and materials, [...] in line with the desire to juxtapose what exists in an inventory of talents". A host of French and international designers were discovered: François Bauchet, Sylvain Dubuisson, Dan Friedman, Olivier Gagnère, Garouste & Bonetti, Eric Jourdan, Jasper Morrison, Pucci de Rossi, Eric Schmitt, Borek Sipek or Martin Szekely, Gaetano Pesce and Nanda Vigo are among those whose creations are published by Pierre Staudenmeyer.

Néotù is a pioneer: many design galleries will open in its wake.

When, in 2002, Staudenmeyer opened the doors of Mouvements Modernes at the foot of the Place des Victoires in Paris, he did not intend it to be the offspring of Néotù, which had just closed its doors near the Centre Pompidou, after 17 years of virtually undivided reign over publishing design in France. The young gallery wants to be free, specialised in the "living sources of contemporary art", mirror and receptacle of the ideas of its founder. Like a second skin, Mouvements Modernes takes shape around Staudenmeyer's activities, between writing books and texts in a historical and scholarly perspective, between teaching and consulting...

During the Mouvements Modernes era, he exhibited ceramic artists who were still little known at the time, such as Kristin McKirdy and Nadia Pasquet, and designers such as Konstantin Grcic and Christian Biecher, Ettore Sottsass and Andrea Branzi, of whom he was one of the most faithful admirers. Staudenmeyer also organised events outside his own walls, most notably at the Passage de Retz (Paris), at the Manufacture de Sèvres and at the Centre Georges-Pompidou in 2002 with an exhibition of 18 pieces by 11 Néotù creators...

Shortly after Pierre Staudenmeyer's passing, in 2008, Sophie Mainier-Jullerot and Chloé Braunstein-Kriegel took over Mouvements Modernes. A difficult task if ever there was one, for in addition to the challenge they set themselves of perpetuating its intellectual heritage, they intend to infuse the gallery with a new identity in phase with the times and with their ideas. At the end of 2009, they were entrusted with the publication of a reference work dedicated to Pierre Staudenmeyer by Éditions Norma (Paris), which exhaustively retraces his contribution to the history of French design from the 1980s to the 2000s. Through the passions of this great discoverer who knew how to build bridges between seemingly foreign disciplines, to grasp the importance of the economic, political, and social context in creation, and whose unprejudiced culture wove links between styles, eras and artistic fields, this landmark work allows us to relive a unique moment in the history of design and the decorative arts. It helped lay the historical foundations for the current craze for the 1980s.

At the end of the 2000s, when the design landscape is changing, notably with the arrival of new design galleries, Mouvements Modernes is embarking on a sector where the boundaries with other disciplines are more blurred than ever. The personalities of Sophie Mainier-Jullerot and Chloé Braunstein-Kriegel are no strangers to the claimed eclecticism of Mouvements Modernes under their aegis. The former, a graduate of the École du Louvre, passed through contemporary art at the Centre Pompidou and then as an assistant in an art gallery, before joining Mouvements Modernes with Pierre Staudenmeyer, who formed her view of design and the decorative arts; the latter, known in the world of design for her writings and collaborations with renowned designers and brands, is a close friend of Staudenmeyer with whom she writes regularly, and shares with him a pronounced taste for the transversality between disciplines.

As proof, while perpetuating the expertise and taste of their founder for ceramics, they intend to bring a new perspective: first by presenting the work of young artists such as ceramists Matthew Chambers or Merete Rasmussen... They are also reviving the limited edition of furniture and high-quality objects, as shown by the exceptional "Louis XXI, Porcelaine Humaine" signed by the designer and theorist Andrea Branzi, which they are co-producing with the Manufacture de Sèvres. Let us also mention the publication of the collection "Traits-d'Union" by the designer Eric Benqué, one of whose pieces received the Dialogue prize from the Bettencourt-Schueller Foundation in 2013, or the work of the designer and art and design historian Fabien Petiot, whose subtle, elegant and lively work Mouvements Modernes publishes.

As soon as Mouvements Modernes took over in 2008, Sophie and Chloé found their way back to the fairs to show both the work of confirmed designers and to propose their vision of today's talents. The question of presentation and layout is at the heart of their concerns. Thus, as a precursor in this field, the gallery moved that same year to a Haussmannian flat in the 8th arrondissement of Paris to showcase the work of the designers and artists it exhibits and represents, in a setting other than the traditional white box of galleries. The setting of the objects and furniture that Sophie and Chloé propose is an asset: architects and designers such as Rena Dumas or Atelier Oï will be seduced by these arrangements and will come, as of 2009, to exhibit new creations at Mouvements Modernes.

More than thirty exhibitions will be organised in ten years, and numerous collaborations and partnerships with institutions and galleries will be set up... Catalogues and booklets will also be produced, in order to remain faithful to the spirit of Pierre Staudenmeyer, on the importance of transmitting knowledge and allowing the processes at work in the field of creation in the broad sense to be understood.

In 2017, Sophie Mainier-Jullerot took over the reins of Mouvements Modernes on her own, Chloé Braunstein-Kriegel wishing to devote herself to research, writing, and curating exhibitions.

Mouvements Modernes then begins a new chapter in its history, one that celebrates maturity, and celebrates its 20th anniversary in 2022: an age of paper certainly, but also the age of possibilities! The moment chosen to engage the gallery towards new creators, in the spirit of the Néotù era, whose production is still little known (and recognised) on the art and design market. Sophie Mainier-Jullerot continues to defend her vision of design and decorative arts, which she developed with Pierre Staudenmeyer, with the same desire to bring together different eras, uses and styles. Fully committed to her passion, she strives to arouse interest through her choice of venues, from the classic gallery to the unusual flat, to arouse in collectors a desire for new aesthetic experiences.

It is in a 19th century chamber music room of the famous manufacturer Erard that Sophie, with the complicity of the architect Alireza Razavi, brings together some forty iconic pieces from 1984 to 2022. Collector's furniture, ceramics and glass will be brought together in this theatrical architecture to offer the rich landscape of the last two decades, hinting at a curious, innovative, and audacious future.