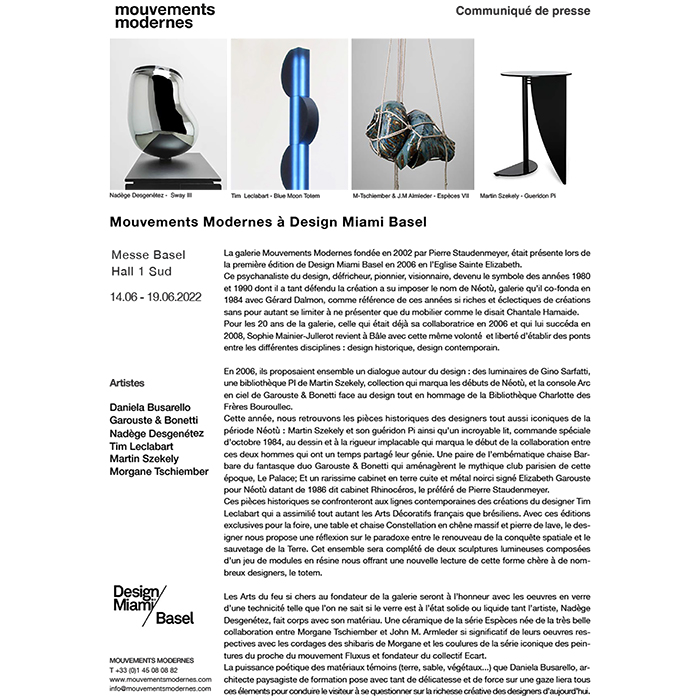 Mouvements Modernes Gallery founded in 2002 by Pierre Staudenmeyer, was present at the first edition of Design Miami Basel in 2006 in the Church of Saint Elizabeth.
This psychoanalyst of design, pioneer, visionary, who became the symbol of the 1980s and 1990s, whose creation he defended so much, was able to impose the name of Néotù, gallery he co-founded in 1984 with Gérard Dalmon, as a reference of these years so rich and eclectic creations, without limiting himself to present only furniture, as Chantale Hamaide said.

For the 20th anniversary of the gallery, Sophie Mainier-Jullerot, who was previously her collaborator in 2006 and who took over from him in 2008, returns to Basel with the same desire and freedom to build bridges between different disciplines: historical design, contemporary design.

In 2006, they proposed together a dialogue around design: lightings by Gino Sarfatti, a PI bookcase by Martin Szekely, a collection that marked the beginnings of Néotù, and the Arc en ciel console by Garouste & Bonetti facing the design all paying tribute to the Charlotte Bookcase by the Bouroullec Brothers.  This year, we find the historical pieces of the equally iconic designers of the Néotù period: Martin Szekely and his Pi pedestal table as well as an incredible bed, a special order from October 1984, with the design and implacable rigor that marked the beginning of the collaboration between these two men who shared their genius for a time.  A pair of the emblematic Barbare chairs by the fantastic duo Garouste & Bonetti who furnished the mythical Parisian club of the time, Le Palace; and a rare terra- cotta and blackened metal cabinet signed by Elizabeth Garouste for Néotù dating from 1986, known as the Rhinocéros cabinet, Pierre Staudenmeyer's favorite.

These historical pieces will be confronted with the contemporary lines of the designer Tim Leclabart’s creations who has assimilated both the French and Brazilian Decorative Arts.  With these exclusive editions for the fair, a table and chair Constellation in solid oak and lava stone, the designer proposes a reflection on the paradox between the space conquest revival and saving the earth. This set will be completed by two light sculptures composed of a set of resin modules offering us a new reading of this form dear to many designers, the totem.

The Arts of fire so dear to the founder of the gallery will be honored with glass works of such a technicality that we do not know if the glass is in a solid or liquid state as the artist, Nadège Desgenétez, becomes one with her material. A ceramic of the series Éspèces born of the beautiful collaboration between Mor- gane Tschiember and John M. Armleder so significant of their respective works with the ropes of the Morgane’s shibari and the iconic series of paint drips by Armleder close to the Fluxus movement and founder of the collective Ecart.

The poetic power of the materials (earth, sand, plants...) that Daniela Busarello, a landscape architect by training, so delicately and forcefully places on a gauze will link all these elements to lead the visitor to question the creative richness of today's designers.