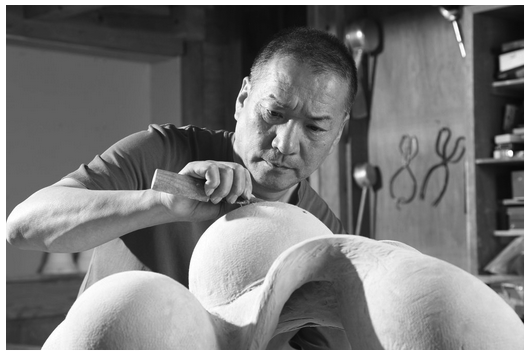 Born in 1950, Harumi Nakashima is known for his biomorphic porcelain sculptures decorated with opulent blue dots, He excels in clay creations far removed from both tradition and functionality.
Nakashima's early reputation was cemented as one of the leading teachers at the Tajimi Pottery Design and Technical Center, having trained and influenced many of the promising young ceramicists of Japan since 1976. Nakashima has received leading accolades as well, including the Japan Ceramics Society Award in 2010 and the Gold Prize at the International Ceramics Festival MINO in 1995. With works collected by 20 public institutions the world over, including the Museum of Ar ts and Design in New York and the Faenza Ceramics Museum in Italy, he is one of Japan's most celebrated porcelain artist. Influenced by the blue sometsuke (under-glaze) motifs of traditional Japanese porcelain, Nakashima's motifs also use cobalt blue over-glaze. Yet unlike traditional methods, Nakashima's blue dots are painted over the body of a work after the main firing, and then fired into the white glaze of the porcelain with a second firing using the technique of "in-glazing", thereby leading to the sinking of the dots upon the white overglaze. Perhaps more surprising is the fact that his organic, sprawling and fluid porcelain bodies are entirely hand-built. As porcelain is extremely difficult to manipulate by free-hand, Nakashima intentionally uses this method to create not only tension, but an epic "battle with clay".